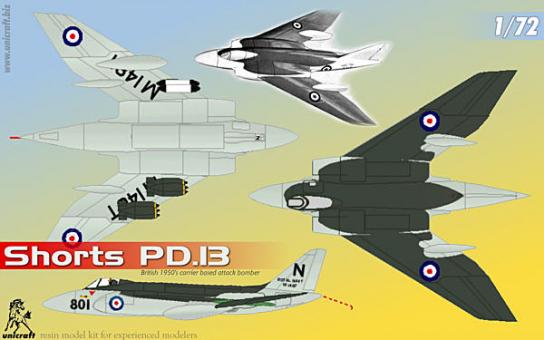 Out of
stock
$115.00
Dispatch
Out of Stock
In-Stock Alert
We'll email you when it's back in stock

Enter your details and we'll be in touch when Unicraft Models 1/72 Shorts PD.13 (Resin) is back in stock.

In the early 1950s, the British Admiralty issued Naval Air Staff Target NAST 39, which laid out the service's requirements for a two-seat, carrier-based attack bomber for service at the end of the decade. This requirement was met, in 1955, by the brilliantly conceived and executed Blackburn/Hawker-Siddeley Buccaneer. But the Buccaneer was not the only response to the Navy's call. Nor was it the most innovative, despite its many advanced features. That distinction goes to one of the proposals that went unfunded, Short's radical, tailless PD.13.
In keeping with the orthodoxies of the time, NAST 39 called for an aircraft optimized for low-level, high-subsonic, tactical nuclear strikes using a 1-kiloton nuclear bomb. This device would be delivered using a high-speed toss maneuver. At a point chosen by computer, the aircraft would pitch up sharply to lob the bomb towards the target and then follow up with an Immelman and a low-level escape. But NAST 39 also required a secondary, conventional attack and reconaissance capability. Both needs had to be met by a long-ranging aircraft that could operate from the comparatively small British carriers of the time. In 1952, the Ministry of Supply regularized NAST 39 as specification M.146T
Short Brothers and Harland became invoved with M.146T at the instigation of the firm's chief test pilot, Tom Brooke-Smith. Brooke-Smith pointed out that the firm's ongoing research into improving the handling of high-speed wing shapes at low speeds and altitudes might give the firm considerable advantages in the M.146T contest, given the awkward combination of high weights, short take-off and landing distances, and high-speed, low gust-response aerodynamics that the specification demanded. This research was an extension of the work of Professor G.T.R Hill, the well-known proponent of tailless flight and the developer of the Pterodactyl aircraft of the 1930s. In the post-war years, Hill became interested int the handling problems that plagued the first generation of swept-wing, transonic fighters and research aircraft. He was able to show that, when applied to a swept surface, conventional structural principles let the wing twist in ways that nullified or reversed control inputs, producing instability and loss of control or structural failure. Hill's answer to this problem was twofold: an "aero-isoclinic" wing designed to flex in ways that enhanced stability and controllability and "tip controllers," all-moving wingtips that offered greater control power than conventional ailerons. Hill's ideas seemed to have merit when tested in the Short SB.1 glider and SB.4 Sherpa jet research aircraft.
For M.145T, the Short Borthers design team proposed a evolutionary two seater with folding, aero-isoclinic wings, tip controllers, and Rolls-Royce RA.19 engines fitted with jet deflection. The the twin-wheeled nose landing gear retracted aft into the uselage, while the single-wheel main struts swung aft into streamlined blisters on the trailing edge of th sharply swept wing.The crew cabin recalled that of the DeHavilland Sea Vixen. The pilot sat under a fighter-type bubble canopy to port, while the navigator sat beneath a flush-mounted hatch to his right
The PD.13 offered too many advanced features to be successful, in fact. These innovations introduced clear risks without offering equally clear advantages. Tailless aircraft had a largely disastrous record at the time (witness the Dh.113). Jet deflection was a complete unknown that might cause all sorts of fatigue, deck handling, and stability problems. The tip controllers, though arguably advantageous for a high-altitude fighter, offered no real advantages in a strike airplane operating at sea level. , There were (and still are) doubts about the real efficacy of aero-isoclinic wing design, particularly since more conventional solutions (such as inboard ailerons slab tailplanes) were by now well-proven. Given the success of the less-radical but still very advanced Buccaneer, all this was enough to doom Shorts efforts. 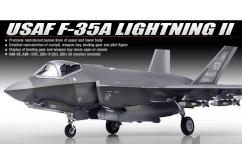 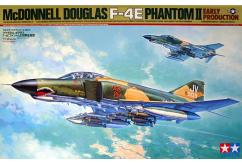 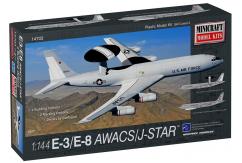 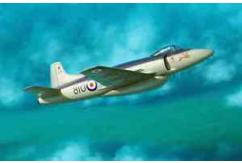